The second year of study has just begun at Fuse RI, an initiative created by the Highlander Institute that is focused on bringing quality professional development to blended-learning environments. The small group in Rhode Island has been fostering a new generation of technology leaders in schools, who will lead the blended-learning charge across the state in the years to come.

The state became a focal point for those interested in using technology to foster personalized learning, engagement and achievement in classrooms after the Rhode Island Department of Education announced in 2014 its goal to become the first “fully blended-learning state.” Since then, the state has been working, in partnership with the Learning Accelerator, towards integrating technology and blended-learning practices across all of its 300 public schools.

Blended learning combines traditional, face-to-face teaching with competency-based online instruction. By combining the best of both worlds, then-Education Commissioner Deborah Gist told The Hechinger Report students can get instruction that is student centered and proficiency based.

“Blended learning is the engine to get to mastery and tackle that challenge of personalization.”

That level of personalization is part of what makes the way Fuse RI trains educators so special. Professional development doesn’t happen for everyone all at once. Training for educators is tailored to meet their needs and abilities, says Shawn Rubin, director of blended learning at the Highlander Institute and coordinator of Fuse RI.

“Thinking of them as the same way we think of students is a huge shift,” says Rubin.

EdTech spoke with those connected with Fuse RI in September, a month after the big announcement from state leaders Recently we checked back in to see how the initiative has progressed.

A little over a year ago, Fuse RI attracted 25 fellows. Since then, Rubin says fellows have been reaping the rewards of their specialized blended-learning training. Ten of the 25 fellows have assumed new roles in their districts, including district technology leadership and building leadership positions, membership on charter technology committees and a promotion from assistant principal to principal, Rubin says.

“It’s really amazing how their districts responded to them and their increased knowledge immediately — to see such a bump so quickly,” he says.

During the first year of orientation, the fellows were given approximately 100 hours of training on blended learning, including terminology, how school networks operate and how district-level decision are made. That training is the basis for the knowledge they’ll acquire out in the field, studying blended-learning environments that are already up and running.

“There is no substitute for embedded, projected-based learning networks,” says Rubin. “They’re really getting a sense of the readiness levels, and that’s making their own job back in their home districts more potent. They’ve achieved a vision and a bigger sense for where this is all headed.”

This big shift toward blended learning is happening in Rhode Island at a time when the means of technology and ambition of leaders have reached a fortuitous intersection, he says.

“As educators, the ultimate objective for doing anything is, we want our students to master things — competencies, Common Core, etc. The challenge throughout time has been ‘How do you personalize that experience for students?’” says Rubin. “You could argue we’ve been at that crossroads for decades — wanting to do it but no ability in a teacher’s daily schedule to make it happen.

“Blended learning is the engine to get to mastery and tackle that challenge of personalization.” 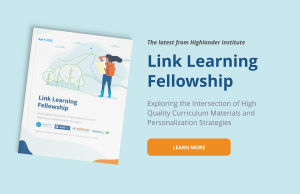